Author’s Note: Written in Summer 2013 as a wedding present for my friend and her new husband.

Poem for My Married Friends

My prayer for you, dear friends, is this:
That you may share in wedded bliss
While holding fast to Faith and Love,
Sharing below the Lord above.
Through trials and blessings the same,
May you ne’er fail to call His Name
While loving your companion true
In all struggles, both old and new.
I pray that this new family
Should be like God–The One And Three,
Who Is and Was and Is To Be–
In knowledge, love, and kind duty.
The Psalmist’s words, for you I pray:
“May they guard you in all your ways.”

Author’s Note: This essay was written in 2009 as part of a school assignment.

Pope John XXIII called the Second Vatican Counsel so as to “open the window and let the fresh air reinvigorate the Catholic Church.” Oftentimes in the Bible, God’s spirit is represented as a strong wind, like at Pentecost.

Many individuals have answered God’s call thanks to His strong push: Peter and the Apostles, the early martyrs, and even present-day saints like Fr. Emil Kapaun and Blessed Mother Teresa. Among them who answered God’s call was Karol Wojtyla or, as he later became known, Pope John Paul II. He became a windmill for God’s will to direct towards the great leader that he would become.

As a young man, Karol Wojtyla grew up in a devout Catholic family. He served as an altar server nearly every day, but he took great pleasure in acting and performing on the stage. His natural charisma drew him towards the stage, but at the same time, he wanted to help others.

This preference of selflessness was a working of God’s Will, and Wojtyla had a great than usual inclination towards God. When he was about to move to Krakow to attend college, his parish priest told him that he should consider the priesthood. Although he had a great love for the theater, Wojtyla also had great charisma and deep insights into philosophy.

When the Nazis occupied Poland, Wojtyla had to make very important decisions. He decided to help Jews escape from Krakow, and thus grew in self-knowledge. He came to Mass everyday and was invited to join an illegal rosary circle by his mentor. Through his meditation, Wojtyla grew unsatisfied with earthly existence and yearned for something more.

He saw quickly the evil surrounding his beloved countrymen and desired to do something to give them hope, to help them survive. He became open to God’s call.
While he was working in the quarry under the Nazis, he became romantically involved with a female friend. They both considered marriage, but Wojtyla was unsatisfied with this idea, and did not feel called to become a husband and father. His prayers became even more intense, with the passing of his father and an increase of violence in Poland.

Over time, Wojtyla became persuaded to the celibate lifestyle. He did not feel called to be a husband, but wished to serve God. Yet, at the same time, he desperately wanted to be an actor. One night, on his way home from work, a truck hit Wojtyla and this further opened his eyes to what he was called to be. Yet, the clearer his vocation became, the more fervent his desire to act grew. “I want to be an actor,” he told his father. Nevertheless, the Nazi regime grew stricter, and universities and theaters were shut down. Any Polish work – literature, poetry, play, art, etc. – was forbidden.

The passing of his father became further confirmation to Wojtyla that he was to join the priesthood. Finally, Wojtyla approached the Bishop of Krakow, Cardinal Sapieha, in 1942. The cardinal questioned his motive in asking to join the seminary. “Wouldn’t you want to pursue your interests,” the cardinal asked Wojtyla. “I would be pursuing my interests,” the young man answered him. And with that, Karol Wojtyla entered the seminary.

During his study at the “underground seminary” run by the cardinal, Wojtyla led a group of Polish people in a chant of their national anthem. This sparked a slew of arrests by the governing Communist regime of the U.S.S.R. This brought into question Wojtyla’s sound motivation: was he doing this to lead others against the Communists or was he truly following God’s will? Wojtyla answered with complete obedience and a willingness to serve others, especially after the Nazis left Poland decimated. Certainly, Wojtyla had the capability to become. He had charisma, a love of virtue, a deep insight of God’s law, and a willingness to serve those in need.

These abilities led Karol Wojtyla to become a man of action, a man of discernment. He helped his fellow seminarians clean up the university, and tried to persuade others from starting a violent revolution against the Communists. He once again reflected that same young man that helped his university professor and his Jewish friends escape from the Nazis. He realized that there was a peaceful of fighting against the Communists, that it dwelt in the youth, and that he must give Poland a reason to hope.

Karol Wojtyla would accomplish all of these things. He would give Poland a reason to hope. He would guide the youth away from worldly desires and towards the eternal rewards that God alone offered. He would be instrumental in bringing about an end to Communism in Eastern Europe. In addition to all of that, Karol Wojtyla would help teach the nations of the world solidarity and patriotism, the way God viewed it. And on top of all that, he became a light to the nations as one of the most beloved Pontiffs of all time. Who would have thought that this would-be actor would one day bring down the Iron Curtain and become a guiding star to God’s Eternal Paradise? 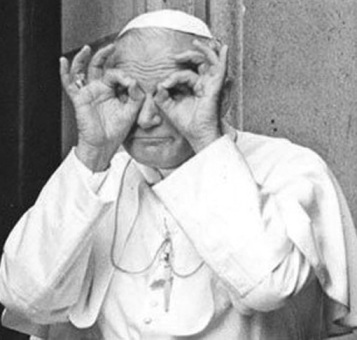